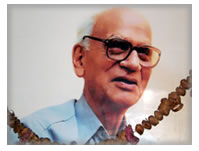 “The voice of the common man must rise,” said this soft spoken revolutionary, on his 91st year, after a quarter century of coaxing that voice out with the promise that he would ensure it got heard. H.D. Shourie, civil servant for 35 years and an agent of civil action for over 25, died on 28th June 2005, having lived a life that straddled many borders.

The most obvious boundary perhaps would be the one created across India in 1947. Shourie worked as a City Magistrate in Rawalpindi and then Lahore till the eve of Partition, when he was appointed Deputy Commissioner for Refugee Relief on this side of Punjab. His career, though successful, acquainted him with an uncomfortable paradox. Years later, he would say ‘Throughout my career, I was faced with numerous complaints from ordinary citizens. But being in the government, I could not do much to ameliorate their plight.’ Another man might have adapted to the notorious inefficiency of governance. Or sunk, as many do, into what Shourie deplored as ‘thinking only about oneself, never about others...the chalta hai attitude.’ But Shourie, fired by a sense of purpose often missing in much younger men, plunged almost immediately from retirement into civil action. Major General U.C Dubey recounts with love and admiration how what began with repeated trips to DESU over incorrect billing and gathered steam over conversations between retired neighbours sipping afternoon tea eventually gave rise to COMMON CAUSE a forum for consumer complaints that, in its greatest victories, benefitted millions.

‘Why am I sticking my neck out? Because that is what a neck is for! Is it not?’

Founded in 1980, COMMON CAUSE lists as its first important case the fight over liberalised pensions. Though of great benefit to pensioners, this liberalisation excluded those who had retired before its implementation in 1979. Shourie began by writing to the Government. When this failed, he wrote in newspapers asking the disqualified pensioners to send him their stories. Letters poured in and armed with a stupendous 15,000 representations, COMMON CAUSE returned to the Government. Once again, their appeal was turned down. Undaunted, Shourie approached a lawyer who drafted a Writ Petition. ‘I did not even know,’ Shourie later reminisced, ‘What a Writ Petition was!’ Two years later, the Supreme Court gave its decision. COMMON CAUSE had won and the repercussions would affect 4 million people-‘ one hell of a lot of pensioners’, as Shourie would later put it with characteristic humour.

Shourie did not rest to savour his victory. In rapid succession, he took on cases that dealt with property tax, malfunctioning blood banks, the Rent Law, electricity billing and telephone complaints, the inefficiency of airlines, the reduction of pending criminal cases and the financial accountability of political parties during elections. In all COMMON CAUSE filed 70 Writ Petitions over 25 years, many drafted by Shourie himself, who began to appear regularly in courts, arguing his cases himself.

‘I cannot reconcile myself to the fact that there are problems around and I cannot save them...These are the things that push me. I have an urge within. If I can do it, why shouldn’t I? If there is something that is causing inconvenience why should I not try and eradicate it? I cannot divest myself of the responsibility’.

And the more responsibilities he took on, the more vital his existence became, despite his advancing age. He did not suffer from weakness, frustration and anger that so often accompanies old age. Yet he was aware of the lonely debility that can plague the aged: and such thoughts led to one of his greatest passions, the morality of euthanasia. Shourie wrote extensively on the subject, fought its case in court and eventually produced a book, Life’s Finale: Voluntary Exit.

Contemplating death, coming face to face every day with the inequities of governance, fighting one lost cause after another, Shourie’s greatest achievement was, perhaps, to retain his sense of humour and his sensibility to beauty. At 70, he taught himself to paint. ‘People paint what is ugly,’ he would say, ‘But I choose to paint the beautiful.’ An avid photographer of nature for 50 years, he transferred this love to the canvas, producing exquisite images-fields of flowers stretching into the horizon, vivid poppies flooding the frame, the translucent splendour of a forest reflected in water.

At 90, he published book of humour, The Funniest Jokes in the World, because ‘one must never lose one’s ability to laugh.’ And he wrote, relentlessly. A small black notebook travelled in his pocket at all times and he would use it to jot down a line of poetry or read out a particularly appropriate couplet. Friends, relatives and acquaintances, those who met him briefly, like reporters, and those whose interaction was more sustained, all remember Shourie with his notebook, and remember the lines he read out to them. His three children, Arun Shourie the former editor of Indian Express and Member of Parliament, Nalini Singh, the television journalist and Deepak Shourie, the Managing Director of Discovery Communications, associate their upbringing with their father’s pithy advice. ‘You are eagles,’ he would tell them, ‘And you will soar to great heights. Contrary winds will only raise you higher.’

They recall their family as independent individuals knit close together, the strength of each personality only reinforcing the others. Shourie’s wife Dayawanti, his companion for over 60 years anchored the family together. The ease with which they complemented each other and the love they shared is apparent in any photograph, in which they radiate a good –natured calm.

Such calm coupled with a magnificent simplicity characterised all of Shourie’s endeavours-the simplicity of flowers and water, the liquid clarity of jokes and shaayari, the everyday relevance of the causes he undertook. His death even was almost effortless-he worked as usual the day before and died peacefully in his sleep. And all the emotion that followed the news-again a simple grief. Condolence letters and obituaries spoke of his wisdom, courage and dedication; and the authors’ sense of loss was apparent. This ‘man of many gifts’ as Khushwant Singh called him, this ‘ messiah of the masses’ as the newspapers referred to him, Hari to his friends and a man of almost divine powers to the millions he helped, H.D.Shourie left behind an uncommonly poignant legacy: ‘The voice of the common man must rise.’