THE LANDMARK JUDGEMENT AND BEYOND 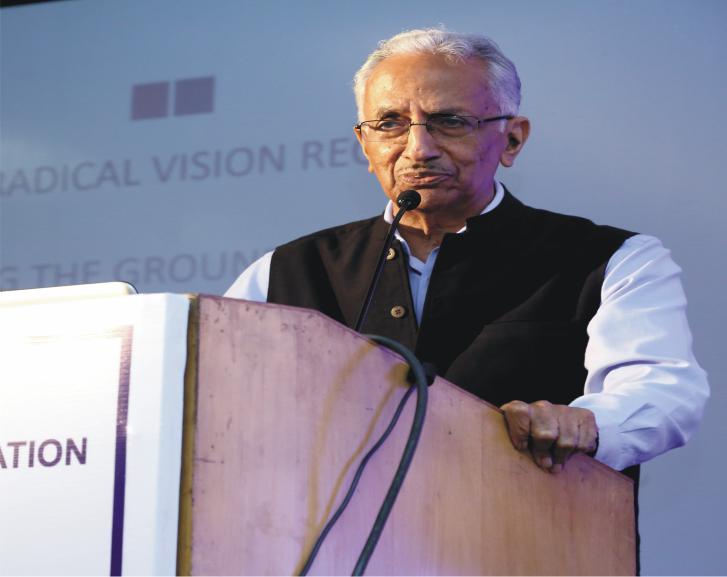 The theme of our deliberations is - “Without Fear or Favor”. How can such policing be achieved? How can the “ideal” be defined? Does it imply a police which does not look up to the  politicians for directions and instead goes by the law books and the Constitution? A police which considers itself accountable to the people of the country? A police which upholds the rule of law under all circumstances, irrespective of the political complexion at the centre or in the states? These are the questions in our minds. This is the kind of police we have been dreaming of and fighting for over the past two decades.

Several committees and commissions have made recommendations on this subject over the years. The last authentic roadmap was laid

down by the Supreme Court in 2006 when it issued a set of seven directives to the central and state governments and said that these would hold good till they formulated their own laws. These directions were a distillation of the combined wisdom of all the recommendations made by different expert panels on the subject of police functioning. I do not claim any copyright on the prayers made in the petition, nor can the Supreme Court insist that the seven directives were original ideas not deliberated upon before. The truth is that the crux of all the recommendations made in the various reports by different commissions and committees were contained in these directives. However, despite 11 years having passed since the said order, the struggle for their implementation continues. It is a sad commentary on the functioning of the democratic system that directions issued by the Supreme Court have not been complied with and the states have been dragging their feet on the matter.

After the landmark 2006 judgement of the Supreme Court, Justice Thomas Committee was set up in 2008 and was expected to look into the status of compliance by different states. The committee, in its report submitted in 2010, was “dismayed” by the indifference shown by various state governments on the subject of compliance with the Supreme Court directions on police reforms. Another committee headed by Justice Verma was appointed after the Nirbhaya incident to suggest amendments in law to ensure safety of women. The report clearly said that unless the police were reformed, women's security would remain a pipe-dream. The findings of the report, 28 pages of which were solely devoted to police reforms, stated that systemic reforms in the police force will lead to improvement of the environment in general and women's issues in particular. Unfortunately, neither of the reports had any effect and the struggle continues till date.

Presently, things are at a critical juncture and the end of the tunnel is not in sight. I wish to raise three questions addressed to three different bodies. One question to the Supreme Court, one to the government, and one to the people of the country. By people I mean not only the citizens of the country but also the media, the NGOs and people from all walks of life.

My query to the Apex Court is that once a judgment has been delivered and directives given, is it not the court's responsibility to ensure their implementation? Is it not incumbent upon the Supreme Court to uphold the supremacy of law? The states should not have been allowed to get away with non-compliance. A time limit for compliance should have been given and disregarding that should have invited grave consequences and penalties. When the top court had the power to discipline the states, why did it refrain from exercising it? Why was it soft on the states which were throwing dust in the eyes of the judiciary?

The states have been submitting affidavits claiming that various steps had been taken in compliance whereas the reality is that nothing had actually changed on the ground. Even when there has been some compliance on paper, for example in the setting up of State Security Commissions in the states, their composition has been diluted, powers reduced, charter curtailed, and recommendations made not binding. Therefore, in the absence of actual compliance, such superfluous compliance serves no purpose.

An in-depth analysis shows that while some states have passed executive orders which do not comply with the directions, other states have passed acts. The states which have passed acts have been very ingenious. The Supreme Court judgement contained a mandatory sentence that the directives would hold good till such time as the states or the center legislated their own laws on the subject. The sentence had to be included because the court could fill a legislative vacuum but could not legislate. The states took advantage of this specific sentence, ignoring the other points and drafted their acts contrary to the letter and spirit of the Supreme Court's directions, legitimising the status quo in the process. So, the big question is, when the Supreme Court issues directions, is it also not binding, incumbent and necessary for it to ensure their compliance?

My second question is to the government whose slogan is ‘sabka saath, sabka vikas’, a catchphrase which is conceptually commendable. The question is, how can vikas be achieved? Economic development has certain prerequisites and requires a foundation based on stable law and order. In the absence of such stability, the entire edifice of economic development will come crashing down. This happened in Haryana a few months ago when `20,000 crore worth of property was destroyed within 15 days and the state was pushed back by at least 10 years. Are we awaiting a similar catastrophe to happen in other states before we realise that ensuring good law and order should hold primacy over building an economic superstructure? We need a reorganised, restructured and rejuvenated police force. Therefore, I wish to question the government if its priorities are right. Has it ensured good law and order in the country to secure sustained economic development? If the answer is in the negative and the subject of law and order continues to be neglected, what happened in Haryana will get repeated in other states as well.

My final question is to the people of the country. The public complains every other day about acts of omission or commission by the police in some part of the country or the other, resulting in the police getting hauled up and put in the dock. The complaints are varied and include issues like refusal to file FIRs, police atrocities and high-handedness, custodial deaths and violation of human rights. If we want the police to change, then we have to raise our voices so forcefully and articulate our views in support of police reforms so strongly that they reverberate even in the corridors of Parliament.

Police reforms are pivotal to holding the structure of the criminal justice system together. The reforms are not for the purpose of strengthening and empowering the police but for ensuring better security to the people, better governance, ensuring that human rights are upheld and rule of law is enforced under all circumstances. I wish to stress that I am not in favour of “independence” of police but want it to have operational autonomy, especially in matters of investigation where it needs to be independent from the external influences and pressures. I conclude by stating that if India is to become a modern, progressive, forward-looking nation, it must have police reforms.

*Prakash Singh is a former IPS Officer and the Chairman, Indian Police Foundation